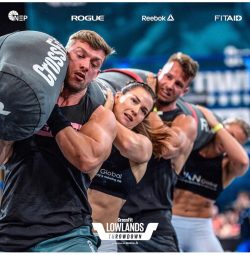 Barebells Prepared after winning and during their final winning event

DUBAI – Marjam Lindsbro, CEO of RKN Global DWC LLC, is proud to congratulate Team Barebells Prepared on its commanding victory in the CrossFit Lowlands Throwdown competition in Amsterdam from May 31st to June 2nd, 2019. This success qualifies the team to compete in the worldwide CrossFit Games championship in Madison, Wisconsin, USA in the summer.
RKN Global is a proud sponsor of Barebells Prepared, which exemplifies the highest levels of dedication, athleticism, and teamwork. Barebells Prepared completed its final team preparations in Dubai before its dominant victory in the Lowlands Throwdown, in which it took first place in five out of seven different heats.
“We at RKN Global DWC-LLC are delighted¬¬—and not at all surprised—about Barebells Prepared’s strong victory at the CrossFit Lowlands Throwdown,” said Ms. Lindsbro, who is a CrossFit enthusiast and trains under team member Mia Akerlund. “We are confident that the team—comprised of Mia Akerlund, Phil Hesketh, Synne Krokstad and Alexander Elebro–will continue to shine in the worldwide CrossFit Games in Madison, Wisconsin, USA, this summer, and beyond.”

About RKN Global
RKN Global enhances the security of people, countries and businesses through cutting-edge identity verification and document screening tools. In addition to MONIIC, its identity verification platform, it offers RKN Pass, which addresses the very serious danger presented by terrorists and criminals who use fraudulent or fake passports and ID documents to cross borders. MONIIC builds on the success of RKN Pass to bring identity security to the next level.

Between 2000-2014, RKN Global founder Ronald Noble was elected three times to serve as INTERPOL Secretary General, and became the first official to visit all of its 190 member countries. He transformed INTERPOL into a global, 24/7 enterprise–regularly deploying Incident Response Teams (IRTs) worldwide to confront serious crimes, terrorist attacks, and natural disasters.