EU Weighs Passport Screening at Outer Borders for All Travelers 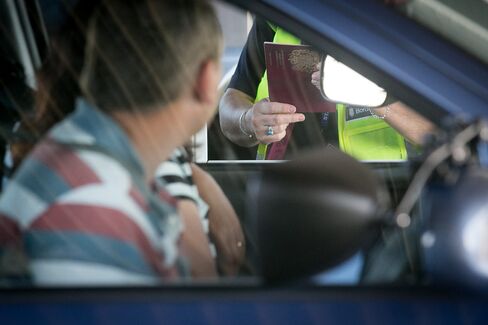 European Union citizens face the prospect of full passport checks when entering and leaving the bloc under an anti-terrorism proposal to be aired on Friday in Brussels, according to a draft statement.

EU justice ministers will weigh “systematic and coordinated checks” at the bloc’s external borders, extending the full-blown screening that is currently limited to non-EU passport holders, according to the document prepared for the meeting and obtained by Bloomberg News.

Countries that now conduct perfunctory checks on EU nationals would be required to do a full database matchup of all passengers at checkpoints on the 28-nation bloc’s outer frontiers.

The proposal overlaps with planned tighter policing of the external borders of a cluster of 22 EU countries and four neighboring countries that have abolished border controls between them.

Justice ministers will also stress the “urgency and priority” of striking an agreement on the collection of data on flights from and to the EU, the statement said. That accord is being negotiated with the European Parliament.